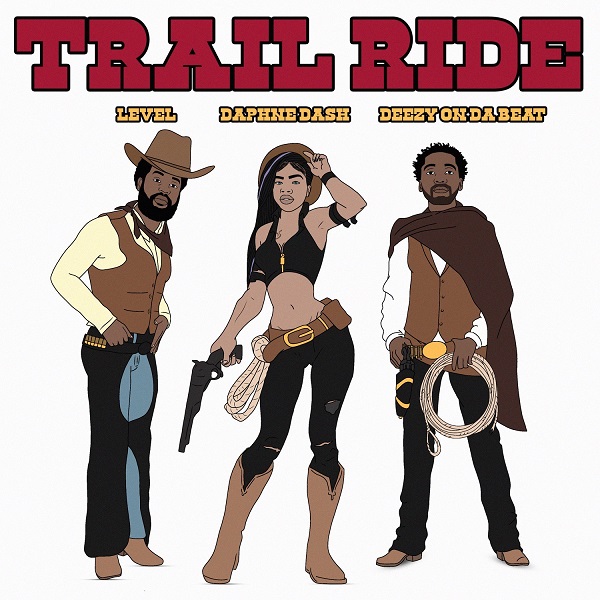 ATLANTA, GA – Zydeco and hip-hop gets some new flavor on the hit new single “Trail Ride,” featuring Louisiana artists Deezy On Da Beat and Daphne Dash. Showcasing a bouncy beat with a distinct old-school country melody in the background, the song almost makes you feel like you’re on the back of a horse doing a fast trot, bouncing along to the rhythm. Its catchy hooks and fun flows make for a truly original take on Zydeco music, and serves as the perfect platform upon which to showcase these two artists’ unique sound and style.

“Trail Ride in Louisiana is a gathering,” Deezy on da Beat said. “We have horses and we blaze trails and there are four wheelers and good food and good family and dancing and Zydeco music and Soul and Funk … it’s that whole culture all together. It’s just a big gathering that’s fun and full of live performances. We all grew up in that culture, and we love Zydeco music. Not many people mess with that genre much and experiment with Zydeco much, and we brought our flavor into it.”

The song was inspired by the late DJ Star, from Monroe, Louisiana, who told Deezy he should merge hip-hop and Zydeco and set him on the path to making this hit single. Sadly, DJ Star passed away before the finished song came out.

Deezy on da Beat is an American songwriter, producer, engineer and CEO of Cutcha Radio up Productions. Based in Atlanta, Georgia, but originally from Jonesboro, Louisiana, Deezy began writing and producing as young as 10 years old. Over the years he’s had the opportunity to work with major artists such as Lil Snupe, Meek Mill, Lil Baby, Yo Gotti, Master P and more. His music is influenced by Southern hip-hop, R&B, Funk and Soul music.

Some years ago he and Daphne Dash connected in Atlanta and bonded over their shared Louisiana heritage. They’ve been working together ever since and are excited to share this latest single with the world. It’s a song that he said not only gives Zydeco music a new seasoning of sound, but just lets people sit back and have fun.

“We’re bringing pure authenticity through our music,” Deezy said. “We make everything from scratch. All of our records we produce, engineer and write. Every track we make is a real vibe. And at the end of the day we hope our music is known for making people feel good and want to dance and just spreading good, positive vibes.”

In addition to the original version of “Trail Ride,” the group also released a club version of the song that features another artist named Level. That version has made its radio debut in in Monroe, Louisiana on 100.1 The Beat since its release. Deezy said he and Daphne plan to follow up with more albums this year, but you can listen to Deezy on da Beat’s six-song EP “The Gift” and Daphne’s EP “Purple Love” on all streaming platforms.

To listen to Deezy on da Beat’s music, or to follow him on social media, please visit the following links: