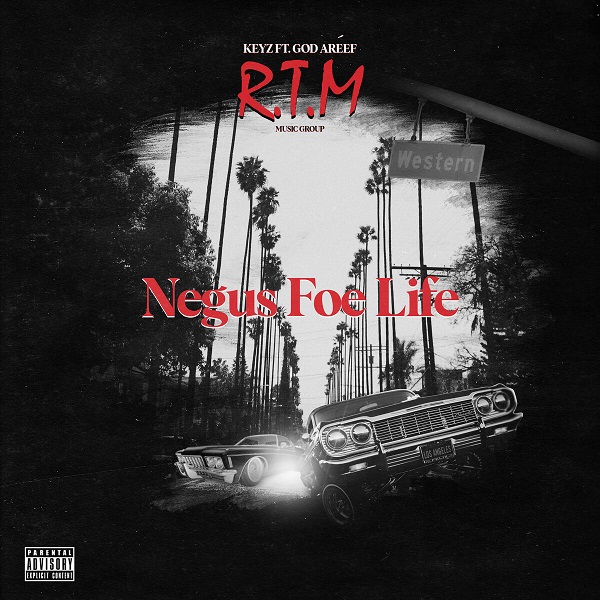 LOS ANGELES, CA – In the Ethiopian Semitic language known as Tigrinya, the term “Negus” denotes a monarch, such as the Negus Bahri (king of the sea) or the Negus Al-Najashi of the Islamic tradition. West Coast artist Brandon “Keyz” Robertson is on a mission to bring that sense of royalty back to his brothers and sisters of color with his new single “Negus Foe Life,” which is currently available across all streaming platforms. Featuring the fast-rising artist God Areef, the single is intentional about challenging the derogatory term of the N-word to give people a different perspective.

The song is has an upbeat vibe with a message somewhat similar to NWA’s “Niggaz 4 Life.” It’s distributed by RTM Music Group, a label that Keyz started with his partner who sadly passed away in 2018 after being shot. Prior to that Keyz had always been the behind-the-scenes operator of the label, but he knew he needed to honor his friend by continuing what they had built and began to be the face of the label both as the primary artist and the CEO. He picked up the pieces and has been building the business ever since, releasing multiple singles and even completing a film currently featured on Amazon Prime called “Baby Gangster The Movie.”

More than anything it’s his unique sound and style that has been drawing audiences far and wide to his music. He bring real-life content through his lyrics and is consistent with his quality, never veering away from the high standard for which RTM Music Group has come to be known.

“I make songs about real-life content that people can relate to,” he said. “Every aspect of life I’m gonna have a song about. I think I have the best hooks, too. My lyrics are catchy, but I think I have the best hooks ever. Ultimately I want my music to be known for being authentic and the realness of it. A lot of times peop0le won’t see your vision when you’re building it, but they’ll see it when you finish it. Ain’t no doubt in my mind that people are gonna get what I’m doing and see what’s going on. There aren’t a lot of West Coast artists right now doing what I’m doing, and I want to represent. It’s time to bring that good music back.”

In addition to “Negus Foe Life,” Keyz is also preparing two other singles to release this summer, “How” and “Crossroads.” To listen to his music, or to follow him on social media, please visit the following links: