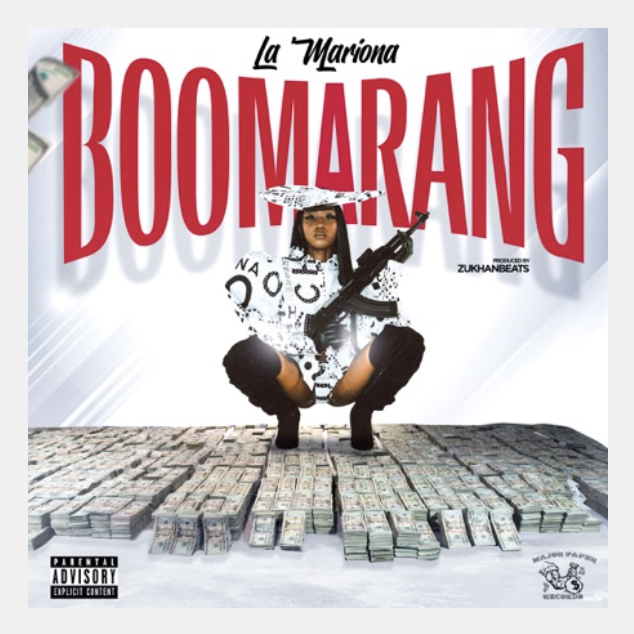 NORFOLK, VA – What you put out into the world always comes back to you. If it’s good, more than likely you’ll receive good in return. But if it’s bad, the negativity will bounce back in ways that are more painful than you might realize.

That’s the sentiment behind the new single from DMV artist La’Mariona. “Boomarang” is a hard-hitting song that not only showcases the originality of this fast-rising young artist, but also offers a feel-good vibe for music lovers all over the world. Produced by Zukhanbeats – the same producer who has worked with Jay-Z, Kendrick Lamar, Ludacris and “WeFlyHigh” Jim Jones, among others – “Boomarang” is a tale of karma over an upbeat vibe that is sure to have heads bobbing, feet moving and girls twerking.

“When you throw a boomerang, it comes back to you,” La’Mariona said. “That’s life. What goes around, comes around. Whatever you put out there in the atmosphere comes back.”

The single is one in which La’Mariona said her fresh take on hip-hop will help her to stand out among the other female artists of the genre. She said she avoids talking about subjects in the normal way most female rappers do, choosing not to use sex and her body as a selling point for her music. La’Mariona would rather become known as an intelligent artist who talks about “real stuff.” Through that work, she hopes to be able to inspire other females to embrace their independence and boldly live without the co-dependency on men.

“Ladies don’t need dudes to be in their lives to be successful,” she said. “You don’t need a partner all the time, and you don’t need a man to affirm you. I hope to inspire girls to follow in my shoes. You can be yourself. You can be independent. You can make money on your own. I’m different than any other female rapper out there because I say things how I want to. I’m not like anybody else, and people are going to see what I’m made of when they hear this music.”

La’Mariona said “Boomarang” is the first single off a new album she plans to release later this year called “BAM (Bitches And Money).” The 12-song project will continue to explore themes that have to do with the ups-and-downs of life. Prior to its release, La’Mariona said she wants to release another single from the project called “Never Truss,” which will be more of a heartfelt upbeat song perfect for the summer.

To listen to La’Mariona’s music, or to follow her on social media, please visit the following links: