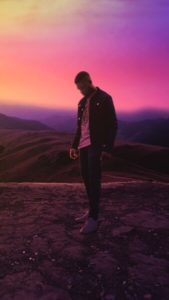 NEWARK, NJ – Sometimes the things that happen in life can feel so surreal that it’s like you’re living in the middle of a movie. That’s the concept behind the hot new single from East Coast artist Nate Dingo. “Movie” is a laid-back R&B and Hip-hop fusion with an international edge that’s got such a catchy groove that it’s already lighting up the East Coast after only a couple of weeks of release. Featuring fellow East Coast artists Kmwurld and YDZ, the song uses an Afro-beat foundation and some amazing flows to capture that feeling of celebration through a very mainstream type of song.

“My whole like I have been traumatized, and when I was reflecting on the things I’ve gone through in life sometimes it just feels so surreal that it’s like a movie,” Nate Dingo said. “I’m a very versatile type of artist who can rap and sing and do Afro-beats or hip-hop or R&B – just a lot of different types of artistry that I think can push into the mainstream. I’m able to attract different audiences in America and worldwide. This song is a good example of that.”

The song definitely has an international flare that is sure to attract audiences from all over the world. Much of that style comes from his Ghanaian heritage. He was born in The Bronx to Ghanaian parents who eventually moved to Newark, New Jersey, where he was raised. He discovered music at an early age, though it wasn’t until he was a junior in college that he decided to start taking it seriously. At the time he was studying to become an electronic engineer, but a friend who goes by the stage name KenzyGuap encouraged him to pursue music, and he hasn’t looked back since.

“I knew I had the gift, but I didn’t think I would pursue it as a career,” he said. “At the time my girlfriend broke my heart – she cheated on me and I was in pain. I didn’t know how to get through it, and something told me to just start doing music – to express myself and let this thing go. I wrote a song called ‘Feelings’ and met up with KenzyGuap and when we made the song it blew up. When I saw the numbers and had his encouragement, I decided I wanted to take it seriously.”

Now he’s focused on becoming one of the hottest new international, mainstream artists out there. Though he’s already become known for being a master of Afro Beats and Hip-hop, he doesn’t want to limit himself to those sounds. In fact, he plans to showcase more of his versatility with a new song called “Down Bad” coming out in the next couple of months, with more singles set to drop this fall.

To listen to Nate Dingo’s music, or to follow him on social media, please visit the following links: