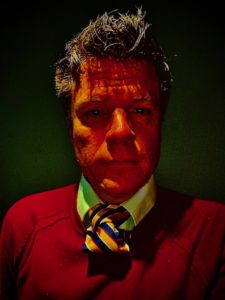 DENVER, CO – If the B-52s and Depeche Mode met Future Pop and Synth Wave sounds, you’d have the signature sound and style of Denver-based artist Spyndycyt (pronounced Spin-Da-kit). His latest single “I Don’t Want To Do This Anymore” is an upbeat, dance-ready track that’s simultaneously trippy and catchy. It’s intriguing in the best of ways and makes you want to move with its frenetic energy and upbeat vibe. And from the moment you hear the first verse come out of his mouth you’ll immediately be taken back to lead singers like Fred Schneider or Dave Gahan.

The video that accompanies the single is equally intriguing. Nothing more than a point of view camera angle stumbling down a stairwell, the dizzying effect of the video is a perfect accompanying visual for this delightfully meandering track. Anyone who is a fan of Synth Pop, Dance Pop, or Alternative Pop will love this song.

“Ultimately it’s a song about the drudgery of life and escaping that mundane reality that we all try to avoid,” Spyndycyt said. “You go to school, you get a job, you get a life, and then you’re stuck. That’s kind of what music is about for me – escaping the routine all of us find ourselves in. Ultimately I’d like to be known as someone who is creative and a little bit different.”

That sentence could very well be the driving force behind a lot of the decisions this artist makes. His stage name, in fact, was created out of an intentional mindset to stand out from the crowd. It’s certainly not something you’d find with a lot of competition when doing an online search of the name, and more than that it’s a name that makes you think a little deeper and wonder about what kind of art comes from a guy with that name.

The answer is – good art. The best kind of art – creative and original and experimental, but pleasing to the ear and catchy in ways that makes you want to hit repeat over and over again. In fact, Spyndycyt said the only thing he’s ever really wanted to do with his music is create something that people can tap their feet to or feel an emotional connection with.

“When you turn on the radio today a lot of the stuff sounds the same,” he said. “That gets old to me. When I first started making music it would devastate me that I didn’t sound like anyone else. I’d beat myself up and think it was horrible. But now I enjoy that and appreciate that aspect of it. There are a thousand artists out there actively trying to sound like someone else. Now I embrace the challenge of trying to reproduce what I hear in my head. When words pop into my head, they’re often already attached to a melody or cadence, and it can be fun to play around with that starting point. And when people ask me to describe it, I have trouble coming up with a genre. It’s eclectic. It’s whatever I hear in the privacy of my mind – whether it’s something to keep or something so bad it embarrasses me. And it’s a lot like what other people think about – dreams, hopes, crippling fears, reservations about life, and a generalized angst.”

Spyndycyt said he has other songs he’s working on that will likely be released later this year, and that he could combine all of them into an EP before the year is over. Until then, “I Don’t Want To Do This Anymore” is available across all streaming platforms.

To listen to Spyndycyt’s music, or to follow him on social media, please visit the following links: